Inspiration is a wonderful part of the costuming process. As costumers we’re inspired to create by all sorts of things we see in our everyday lives. Films, comics, books, pretty fabric…all of these have provoked us over the years. You know that feeling – you’re sitting in a dark theatre, watching a film (it could even be a crappy film), and all of a sudden your eyes are riveted to the screen – struck by some pretty costume or shiny bauble flashing across the celluloid — okay, so technically film is no longer celluloid. That’s not the point here. We’re talking inspiration.
That inspiration can strike at the most random times, in the most random places. Just the other day I got an idea for an accessory for Tesla while working my Friday shift at the coffee shop. On a lark, I took a coffee filter, folded it into a quarter of its size and clipped it to my head with a barrette. It had a kind of flamenco-style look to it. I got some compliments on it. And it was a coffee filter! Not something I’d normally consider using, but I’ve already decided that it’s going to be incorporated into my steampunk hairstyle.
I’ve had inspiration happen in Home Depot and Five-Below. I’ve seen it strike in the craft store, in the middle of an aisle where clock supplies were laid out. It’s incredible what people think of to use in their costuming.
Occasionally, I stop and think about my own inspiration for costuming. Of course I draw a lot of my ideas from the films I see and the books I read. And, occasionally, from random dreams I have. I’ve got a whole “to be made” list based on movie and tv show characters.
More and more, though, I’m inspired by the work of other people. I am overwhelmed by the creativity and skill of people who look at materials that I see everyday and see wings or headpieces or whatnot. I am seriously in awe of some of the things that are out there.
I saw Maggie’s current steampunk work-in-progress yesterday. It’s fantastic. All sorts of doo-hickeys and accessories worked into what she’s got so far, and all forming a wonderfully unique, cohesive look. As far as I know, she’s already got her whole look planned out in her head.
I don’t even know what kind of shirt I’m going to wear, or how to make pants work with what I’ve got.

Maggie constantly amazes me with what she can build out of cardboard, wire and hot glue. I mean, she built fawn-like leg extensions for her Halloween costume. She’s fashioned an entire Skeksis head out of used boxes. I can barely get my tiny hands to cut the cardboard with a pair of garden shears! And her Gabriel costume from Constantine is my favorite costume of hers ever.
Another person whose work inspires me is my friend, Angelica. She’s currently going to school

for fashion design and, looking at the costumes she’s completed already, it’s easy to see why she’s drawn to that field. She doesn’t stick with just one style of costume, either. She’s done pirates, Harry Potter (possibly the best Snape costume I’ve ever seen), various Star Wars characters, Belle from Beauty in the Beast. And, on top of that, she makes some wonderful props. I was lucky enough to be given two wands that she made, for use with my Harry Potter costumes. I still can’t figure out how she made them. (my own homemade wand – created before she sent me my wonderful prezzies – is made out of sculpey clay and looks a bit droopy and crooked) 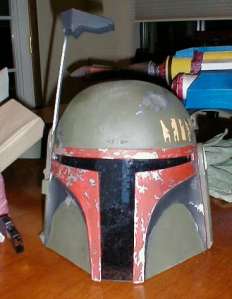 I also tend to draw inspiration from the work of random strangers. I’ve seen some impressive costumes at Fairie Fest (a dude with moving metal wings), Renaissance Festivals (in a league of their own), film openings (I saw the best Han Solo ever out a Manassas Cinemas a couple years back), and sci-fi conventions, as well as various websites online. Hell, I saw a posting on the instructibles website where a kid made a Boba Fett helmet out of cardboard! That sure as hell inspires me!
What inspires me? It seems everything does. 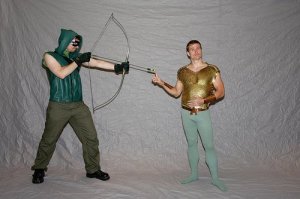