No, no one died. That’s simply one of the first things Maggie said the other day when we sat down for dinner over at Noodles and Company. I had just gotten in from a quick trip to Charlottesville and had made arrangements to meet up with Maggie and her younger sister.
Even though there was no real context for the statement – as so often happens in conversations between Maggie and I – I knew exactly what she was talking about.
G Street Fabrics.
*sigh* Such a lovely store. It’s a DC-based business. That is, it got its start in DC. In 1941 on G 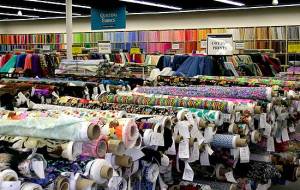 Street, to be exact. The flagship store eventually got so big that they relocated to Rockville, Maryland. Two more stores have since opened up in Virginia. The one in Centreville is the older one of those two but the nicer one is the one in Falls Church.
I remember the first time I went to the Falls Church G Street. Mom was looking for a particular kind of fabric for some project she was working on. I think it was when she was doing the decorations for my cousin’s wedding. Anyway, we had looked at the regular fabric stores – JoAnn’s and Hancock (back when Hancock was still easy to find in our neck of the woods). Mom had even looked in at the fabric section of Walmart. Finally, she figured she’d find what she needed at G Street. I tagged along.
It’s kind of odd that I went along with her, actually. I wasn’t into costuming in quite the same way as I am now. As far as sewing went I was mainly doing a couple of little fix-it projects. I was in the theatre department of my high school at the time, so I was definitely working on costumes, but at the time I was still one of the assistants working on hand-sewing trims. This was the pre-costume mistress period of my high school career. Sewing machines were still kind of shaky territory for me – the only one we had was my Mom’s old Singer, which I was convinced hated me. I know that I had used a serger for the first time already but it still had a level of “Oh holy crap! That blade is going to cut my finger off!” attached to it (I have since moved on a bit from that fear and dream about owning one now).
Basically, I was still kind of a tourist to the wonderful world of sewing. I was a dabbler. Hell, I was doing good to remember to tack on the pattern extensions when I cut out some of the fabric at school. (Yes, Maggie, I know I gave you a hard time about your entrance into pattern cutting — I had problems with it in the beginning, too) So, it was with a bit of disconnect that I followed Mom on her errand that day.
Now, if you’re shooting for a grand entrance into a fabric wonderland in Northern Virginia you can’t really do better than the Falls Church G Street. The store is located in one of the complexes out at Seven Corners. It’s surrounded by a Home Depot and a Borders. The entrance is on the same level as the rest of the complex, but when you walk through the door you don’t immediately find yourself in the main store. Instead, it’s kind of like a little lobby. There are a couple of shelves and display racks on either side of the entrance, all holding a sampling of fabrics. There’s an employee up there all the time, to watch the merchandise. If you walk past their little table, you’ll come to the escalators.
The escalators are possibly my favorite part of going to G Street. Not because I’m entertained by them (well, to be honest, yes, I do like escalators in general) but because it contributes to the big reveal. The escalator slowly brings you into the light of the main section of the store and, for a moment, it seems like you’ve died and gone to fabric heaven. You can almost hear the angelic choir singing as the room opens up in front of you. Table upon table of silks and satins and cotton knits and batiks and so on are laid out in front of you. When you get off the escalator and look to your right you’re greeted with the second half of the store, which is devoted to the home decor fabrics. I don’t even get to that half of the store most of the time.
There is a special section for high class “special event” fabric –

fabric you might expect Oscar dresses to be made of – and a separate section for wedding dress fabric and supplies. There’s a nook for notions. And by “nook” I mean a section of the store that is probably as big as my entire basement. There is another corner of the store devoted just to patterns. And not just the Burda, Butterick, McCall’s, Simplicity and Vogue patterns you can find at JoAnn’s. They have all kinds of designers that I have never even heard of. They have a whole corner just for historic and cultural clothing patterns.
When I say it’s beautiful, I’m not kidding.
Looking back on that first trip, there was an experience that seems kind of prophetic in a way. Mom was looking through the wedding notions section for different things she needed and I got to talking with the G Street employee who was helping her get fabrics out to look at. I don’t remember how we got on the topic, but we started talking about costumes. It turned out that the woman was a big-time historic re-enactor. Her period and region of choice? Renaissance England. While Mom got fabric cut at one of the tables, the woman showed me a hand-beaded snood she was working on, followed by the hand-embroidered sleeves she was sewing for her new costume. She laid it out on the table and even let me run my fingers over the beading. For a costumer specializing in high court Renaissance clothing to even let you think about touching their unfinished work (and sometimes even their finished work) is amazing. For her to actually let me pick it up and take a close look at it was even more astounding.
And I think that’s when it happened. I’m not entirely sure because, really, how can you pinpoint the exact moment?
But I am pretty sure that’s the moment when costumes made the jump from a department in theatre where I helped out to a passion of mine.