As I mentioned in one of my earlier posts, I’ve noticed a trend running through a lot of my current projects (both the ones I’m actually physically working on and the ones that are in the “next-in-line” phase). A great deal of what I’m sewing at the moment has a very retro feel to it. The two eras I seem to be pulling from the most are the 1940s and 50s. And maybe a tad from the very early 60s. (And no, the 60s weren’t just peopled with hippies wearing jeans and gauzy shirts and cascades of beads and pendants)

Hairspray was on last night and I was struck, once again, by how many of the dresses of the dancers on the Corny Collins show I like. I think it’s just something about that silhouette. It’s kind of reminiscient of the lines of my hoop skirt for my Antebellum looks, only shorter. It is really odd that I would be so drawn to these dresses, with their frilly, fluffy underskirts and the obvious presence of hard-core undergarmets (have you ever seen some of the old adds for 50s era bras and girdles?!). In many ways I’m not very girly. I don’t particularly like pink or many of the variations on that color there are. Every now and then I wear something pink, but not often. I don’t wear skirts or dresses all that often, either. It’s just easier to go trouncing through the woods and climb into all kinds of interesting places when you’re wearing pants.

That being said, I am freaking in love with the clothes from these two eras at the moments. A lot of the retro looks based on these periods are actually pretty curve-friendly, too. Granted the bras don’t look all that comfortable, but the clothes themselves usually are. According to an article I was reading online the other day (unfortunately, I forgot to save the address…I know, bad blogger), it’s actually easier to find vintage clothing that has never been worn in the larger sizes than the smaller ones. I’m going to have to keep my eyes open for this. I’m wondering if it will be easier finding larger size vintage clothing than retro fashion.

And here’s where the discussion of retro vs. vintage comes in. A quick google search of vintage clothing will turn up a lot of hits for outfits and pieces that should actually be referred to as retro. What is the difference, you ask? Well, here’s a quick rundown, via Wikipedia:

Generally speaking, clothing which was produced before the 1920s is referred to as antique clothing and clothing from the 1920s to 1980 is considered vintage. Retro, short for retrospective, usually refers to clothing that imitates the style of a previous era.

Seems simple enough, huh? Well, that’s where things can get a little dicey. I think most people think of the 40s-70s (and sometimes even into the god-awful fashion of the 80s) when they hear the word retro. I’m pretty sure the huge cages and bustles of the antebellum and Victorian period would not pop into people’s mind. And that’s where they would be wrong. A friend of mine who is currently in school for fashion design (hey there Angelica!) recently completed a project that required her to find contemporary fashion and link it with trends from EVERY PREVIOUS ERA. The point, her teacher said, was to show how fashion is cyclical. What we think of as new and cutting edge is often subtly (and, in some cases, not so subtly) influenced by previous trends. The afore-mentioned crinolines and bustles can be seen in the wedding dress magazines at Borders. “What about those simple A-line style dresses, though?” you might counter. You know, the ones that kind of resemble long white silk nightgowns? I’ve got new for you…most of those are pretty good reiterations of some 1930s evening gowns. In fact, I think that most of what we see and wear today can, if you really study it, be considered retro.

By the by, I’ve yet to see the finished history of fashion project that Angelica did but, to give you 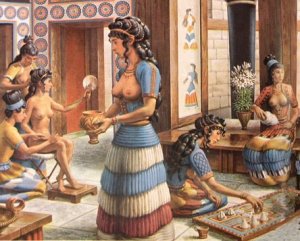 an idea of how contemporary fashion is being informed by much older styles, here’s an example she sent me. She needed to find a piece that was influenced by Ancient Minoan culture. Now, most folks probably aren’t going to know what Minoan culture even is. I do, but that’s because I also belong to that group of individuals who classify themselves as history geeks and get excited about archaeology documentaries. For those of you who are not familiar with Minoan fashion, check out the photo on the left (**Caution** If the presence of boobies in art makes you nervous, don’t look. And yes, I just said boobies and art in the same sentence). When Angelica sent me the source material I couldn’t even think of a contemporary equivalent right

away. However, when she sent me the picture she was going to use, I instantly saw the connections. Obviously, the model is not showing as much of her – ahem – natural acoutrements as the women in ths painting ar, but you can definitely see how Minoan fashion has influenced this particular designer. The big question, however, is whether the designer knows that they have been influenced.

Now, on to the second part of the post:

As I look at the styles that I’m currently being drawn to, I’ve been starting to explore the different fashion sub-cultures that are out there. A lot of the stuff that I seem to be gravitating towards might fall under the category of “rockabilly.” Now, rockabilly typically refers mainly to a specific music genre – influenced by rock, country, western swing, boogie woogie and rhythm and blues – but it can also refer to the fashion that is tied with that particular movement. The folks who perform in a rockabilly style certainly subscribe to the style of dress that springs from it. In many ways, it’s a pretty easy style to carry off – guys can just model themselves after folks like Buddy Holly or early Elvis Presley. Women can draw from a couple of things – much of what falls into the rockabilly vein, fashion-wise, could also be labeled as “pin-up” style. There are subtle differences between the two, though. Mainly, that pin-up is going to be a little more risque a lot of the time – it’s going to show a little more skin. Because, let’s face it, a pin-up model is something that guys would literally pin up on the wall to ogle. If given the choice, most guys would probably choose to ogle the model wearing less clothing.

Although I do know a guy who loves it when women wear spring dresses. He thinks they’re sexy. So, in his case, he’d probably pick rockabilly over pin-up.

Unfortunately, many of the musicians who play this kind of music don’t often get the same kind of play and popularity as pop musicians do. It’s a shame, really, because they’re really talented. It’s just that I think people are hesitant about getting into niche music because they think listening to something that’s not appealing to the masses will somehow identify themselves as uncool.

I’m happy to say, though, that it seems the fashion aspect of rockabilly is doing well. In my search for everyday clothing that falls into this sub-culture, I’ve found a couple of really good sites with some adorable clothes:

I’ve also found a site with a pretty good run-down on the ins and out of rockabilly fashion, and even some how-tos for your hair:
http://www.rockabillyhairstyle.com/

2 thoughts on “Retro vs. Vintage, and Rockabilly trends”