Saturday was our first full day at the convention. We left a bit later than we 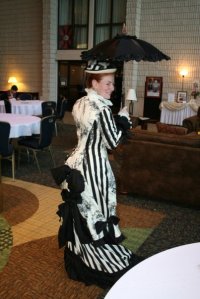 originally intended to…mainly because I think we were both still kind of tired from running around the previous day. I was still sore from general back and joint issues that had started on Friday and Maggie was a bit sore from walking around in her stilts Friday night, but we both donned our respective gear for Saturday’s fun – which included heels for both of us.
My heels were a little more manageable. I ended up getting a pair of Mudd boots over at Kohls (I love the end of winter sale – I believe they were only $10). They’re half a size too big, but nothing a thick pair of socks can’t handle. Maggie’s boots have a little extra “character,” due to a mishap with one of the dogs at her house, but they are awesome none-the-less. Just something that I don’t think I could wear for longer than an hour at most.
We had already agreed that Saturday was to be “Steampunk Day” for us. Maggie’s costume was 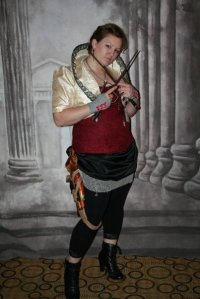 certainly much more cohesive than mine was. Remember the problems with the pants? I had managed to fix a great deal, but they ended up being too big in some parts (mainly in the back) and I still hadn’t finished the eyelets on the corset, despite working on them until about 4am the previous night/early morning and all the way to Timonium on Saturday. I was wearing my back-up steampunk vest for most of the day – which was still too big. I ended up bringing in my sewing gear and spending most of the day hand-sewing eyelets on with gold thread. Near the end, I just got tired of trying to make them all look nice, so the back eyelets, which no one was really going to see, ended up being sewn in with fewer stitches. It’s done and able to be laced, but it’s definitely on my “to be mended/finished better” list.
Maggie kept being stopped in the hallway by folks who wanted to take pictures of her costume. 🙂 Personally, I think she should have gotten a hall costume award that day. Just saying.
When I finally got my corset done I went out to the car to change. Maggie helped lace me into the thing. It laces in four places, front and back and, due to the greatly lessened range of motion lacing myself in just wasn’t going to happen.
Like any well-made and well-fitted corset, this one was extremely comfortable to wear. There 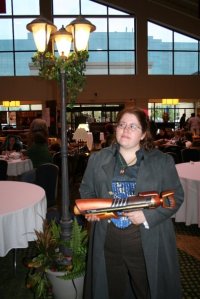 isn’t really any room to bend at the waist but that’s okay — the back problems had made that impossible anyway. It was the first corset I had finished that used the cable tie boning that I had read about on another costume site and I found that the assortment of cable ties really held up phenomenally throughout the late afternoon and evening. When everything was finished and laced and tied and whatnot, I felt more comfortable walking around. It was like wearing a blue and gold silk brocade back brace. Just so you know, I’m supposed to be “lost” in this picture.
As I said, we really didn’t go to many panels on Saturday. The only one we sat through was “Historical Corseting.” Both Maggie and I wanted to go to this one, as we were both obviously starting to get into building corsets. Unfortunately, this panel didn’t end up being about what we thought it would. I thought it would be a more hands-on panel, showing the different types of corsets in real-life, or giving examples of where to get materials that were either historically accurate (reeds boning for certain styles) or that were good stand-ins for the flexibility or rigidity of said materials. Instead, the lady who was running the panel just handed out a couple of stapled, photocopied pages about different kinds of corset types, and read directly from the pages. As far as I could tell from trying to look over someone’s shoulder (she hadn’t made enough copies for everyone), she had just cut-and-pasted from the Kyoto Costume Institute’s extremely large publication, Fashion. While the book is an absolutely fantastic reference for historical costuming, most of the folks in the audience for the panel already have this book (some even have the rarer, more expensive two-volume version). I came out of that panel less than impressed.
Maggie spent a good deal of Saturday chatting with me while I sewed and dashing off to take pictures of all the pretty costumes.
And there were a LOT of very pretty costumes. Although Costume Con-goers sport costumes 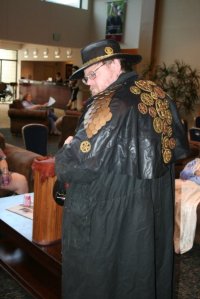 from a wide variety of genres the vast majority of folks attending had chosen to attend in either historic dress or in variations on a steampunk theme (though, one could argue, much of steampunk can still be tagged as historic). The gentleman pictured here had fashioned all of the cogs on the back, as well as all the scales on the shoulders, out of sculpey clay. He also had a belt-like addition across his chest with little sticks that were supposed to look like dynamite. At least, I assume they were supposed to look like dynamite.
One of the most interesting pieces (and probably most photographed) was a costume that fit under the steampunk and the vampire theme — in case I forgot to mention it, the theme for this year’s Costume Con was Villains, Vixens and Vampires. Anyhoo, the costume (the blue one seen here) was an absolute marvel of construction. It had a corset, a bustle, little steampunk additions — it was the bustle that really 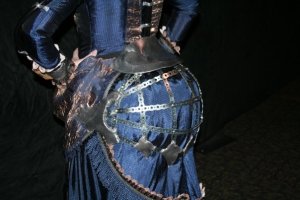 attracted everyone’s attention in the beginning. It was constructed – shall we say – unusually. She wore it both Saturday and Sunday, and the folks who ran the “Trash to Treasure” panel Sunday afternoon invited her in to talk about it. I found out later that there was actually more to the costume, originally, but it didn’t make it through customs; she owns a supply store up in 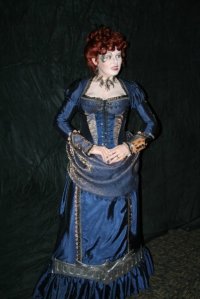 Canada and had to fly down. The extra bits were supposed to emit steam from the bustle and pull up a section of the skirt. As it was, it was an awesome costume. And she even managed to get around the ever-present problem when wearing costumes to a con — the lack of pockets! Most costumes just don’t allow for places to carry the everyday flotsam and jetsam that we’re used to hauling around with us. This costumer, however, had made a wonderful panel on the front of the skirt that could be draw aside to reveal a whole front made up of pockets. The pockets were made of light blue organza, so you could see everything inside them. I’m definitely going to be stealing that idea.
The Fantasy/Sci-Fi Masquerade took place Saturday evening. The line was pretty long by the time we lined up, but we still managed to get pretty decent seats. We weren’t too far back in the audience, and we were close enough to the side in case one or the other of us needed to get up and go to the bathroom. I had my video camera out, but I honestly didn’t get many good shots. I was in a decent enough place to see the costumes coming out on stage, but not to photograph or videotape them myself.
Here are some shots that Maggie took over the course of Friday and Saturday at Costume Con: 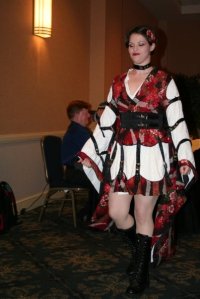 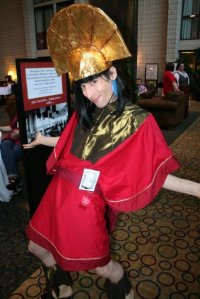 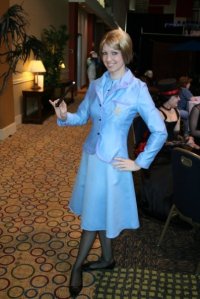 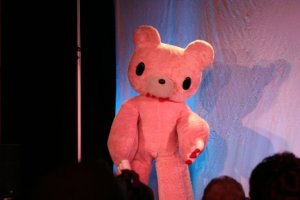