Although conventions are held year-round I always tend to think of summer as “Con Season.” It’s not that I typically go to a lot of cons during this time. I actually usually only make it to one regularly. Occasionally there will be a year when I manage to squeeze two in. This is one of those years.

I had originally wanted to go to a couple more this year: Farpoint, Balticon and another one I can’t remember at the moment. The initial schedule of events I had seen for Farpoint didn’t look very promising, so we ended up not going to that one, but I took a look over the finalized schedule (it’s incredible the things you can find on Google) and I kind of wish we had gone. Balticon ended up not being a go simply because too many things were already planned for that weekend.

The next con that we are absolutely committed to attending is Shore Leave. The con takes place July 10-12, in the same hotel where Costume Con took place. I think we’re planning on staying at the hotel for Shore Leave.

Now, usually we’re up in Canada during the time period for Shore Leave, attending the absolutely lovely Polaris. Polaris wasn’t the first con we ever went to but it was certainly the one that cemented our attendance at more in the future. This year, as with last year, Shore Leave and Polaris actually fall on the same weekend. The first year we went to Polaris they were actually on different weekends. If I had had any money left over after our trip to Canada that year I would have gone to Shore Leave that year, too (Paul McGillion was there and, by that time, I was a big fan of Stargate: Atlantis). Alas, that was not to be.

The scheduling of these two events for the same weekend forces a very painful choice upon us: do we scale back on expenses and travel time and attend the local con (which has been going for a little longer than Polaris and is apparently one of the best cons on the East Coast) or do we set forth on another trip into our beloved neighbor to the north, spending quite a bit more but definitely getting our money’s worth?

Typically the decision of which con to go to comes down to the guest list. Last year’s author guest of honor at Polaris was Jim Butcher. That was all I needed to hear to cast my vote for Polaris. In fact, I remember Maggie coming into my office and asking if I had seen the author they had chosen yet. She was tremendously excited and I figured only two authors were likely to get her that wound up. Since it was unlikely the other author would be there (J.K. Rowling, in case you’re interested) I figured it had to be Butcher. When I found out I was so excited I couldn’t sit or stand still. Glee like you’ve never seen before! The actor guests that they had scheduled just made it even better: Zachary Quinto (who, unfortunately, had to cancel), Rachel Luttrell, Gareth David-Lloyd, Rainbow Sun Francks (a last minute addition and my favorite experience of the whole con), Terry Farrell – who apparently does con appearances EXTREMELY rarely. There were others, but these are the ones I remember.

Now, lest you think that Shore Leave gets guests who are less illustrious, let me set the record straight. Their guest list read as follows that same year: W. Morgan Sheppard, Mark Sheppard, Malcolm McDowell, David Hewlett, Kate Hewlett, Jewel Staite, and…George Takei! I found it interesting that they had two families there. David and Kate are brother and sister and Mark Sheppard is W. Morgan Sheppard’s son. Maggie said the biggest draw for her that year was Malcolm McDowell. Honestly, the presence of George Takei was almost enough for me to miss Jim Butcher in Toronto. I didn’t, though.

I’m honestly worried about Maggie’s sanity at this con. I don’t know how she’s going to react, being so close to Kevin Sorbo. Come to think of it, I’m more worried about Kevin Sorbo than I am about Maggie. I suppose I’ll have to bring along one of those big paddles they use to pull pizzas out of the oven with to scrape her off the floor. 🙂

For the most part my major costuming demands are already taken care of. I’ll most likely be wearing Molly Weasley and the Jedi. I have two other costumes I could use for the third day, but I might try to pull together something new. Maggie suggested making the costumes for the Blink angels. I think this might actually be what we end up doing. 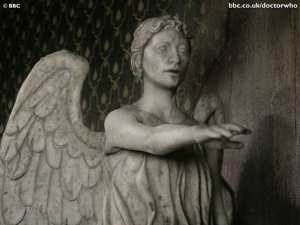 The costumes are deceptive. They look rather simple – angels wearing Grecian dresses, with a scary looking mask hidden by their hands. What looks easy, though, takes on the real degree of difficulty when you have to figure out how to make your skin look like stone.

Lucky for me, I found a blog that gives tips for how to make the costumes. If we end up doing this, I think we’ll aim for presenting them at the Masquerade. I’ve even got a skit worked out for it…just need to get the audio clips that I want.

The plus part of this costume? I don’t have to buy any of the fabric! I’ve got a bolt of black polyester that I got for free from my sister’s grandmother-in-law (well, she’s not really the grandmother but that family tree is too confusing to figure out what the actual term is so we’ll simplify for the sake of this blog entry). Apparently there are at least two more bolts of the stuff back at their house. Bertha gave me the bolt of black and some random yardage of an equally random white and turquoise ripple check fabric that I have no idea what I could possibly need it for. It looks kind of like this only, you know, ickier and turquoise.

I’m not really a fan of using polyester in my costuming or when making clothes for myself or others. Occasionally it is right for what I need but this isn’t usually the case. There are a number of problems inherent in using polyester: it doesn’t breathe, the material doesn’t manipulate well, it doesn’t take dye, and it just doesn’t really feel all that nice against your skin.

There are a couple of advantages, though…polyester tends to resist wrinkles. That’s on the “good” side of the list for costuming, as wrinkles are bound to happen when you sit down in your costume. Sometimes wrinkles can be a good thing – it makes some items look more realistic. However, there are such things as unsightly wrinkles. Polyester also tends to self-extinguish after coming in contact with flames, which is definitely a good thing if you have a costumer who has a potential fire-hazard in their skit or nearby. Ideally, if you want to include polyester in your costuming, look for poly-blends which incorporate other, natural fibers.

Although an entire bolt of black polyester (which actually tends to shed microfibers something awful!) would not normally be my first choice for ideal material, in this case I think the sturdiness inherent in the material will help add to the illusion of a carved stone statue. Plus, it was free! I’ve already used a good deal of the material for other projeccts, but I should have enough to make my costume.

I plan to start construction on the dress next week.