::peers at clock:: I can’t believe I voluntarily woke up, got out of bed and dressed myself before noon. I actually got out of bed at 10am this morning, which just blows my mind. I think I would have been well within my rights to sleep in past noon today. Obviously my body doesn’t agree. Of course, it’s probably just gotten used to the conditioning it received this past week. While down in Atlanta we didn’t usually sleep too long past 8am. Maggie and I would wake up nice and early, take our showers and pull out our costumes for the day. The general plan was to get downtown and find a spot in the parking lot right next to the Marriott Marquis before it filled up for the day. I’m proud to say we never had to park anywhere else. Parking WIN!

So…now that I’m back…

About those con reports.

Don’t worry, they’re coming. I’m just going to need to break them up a little bit, otherwise they’d be enormous. Of course, even breaking things down into smaller, more manageable sections won’t make them tiny by any stretch of the imagination. Saturday alone is probably going to run into three parts, simply because I’ll have the parade, the day’s adventures, and the Alderaan party to cover. That’s right. An Alderaan party. Just tossing that little morsel out there to tempt you to read the coming con reports.

I’m actually sitting here at the computer desk, staring at my con notes, wondering how I’m going to do this. I think the big problem now is not so much that there is so much to write about, or that I’m still kind of tired. It’s that I’m still sort of on a convention high.

No, I’m not talking about illicit drugs or anything like that. Anyone who’s ever been to a convention (and loved it…I’m sure this wouldn’t hold true for folks who’ve gone and had horrible experiences) will probably agree that, after you come back, it’s like you feel removed from everything in your “normal” world. Because – let’s face it – sci-fi cons aren’t really the normal world.

Oh sure, they’re normal for us geeks and nerds who attend. We fit in just fine. All sorts of things that we love (and are usually made fun of for loving) tend to be present in one convenient place. What’s not to like?

However, even though we get to feel normal and like we fit in – blending into a sea of other wonderful geeks – we know that that feeling is going to end. All to soon, the end of the convention weekend draws near and the hotel starts clearing out. You say goodbye to all the fellow fans you’ve met and chatted with and head back to your work-a-day life. I don’t know about you but, after I get home from a con, everything else just looks a little less bright and colorful. I think it’s just because I’ll have spent the weekend before the regular week looking at dazzling costumes and bright lights and then, all of a sudden, I’m back in the “real world” and it’s serious lack of professional stage lighting.

Anyhoo. This entry is mainly filler. I promise that the real con reports will start soon. At the moment my goal is to have the first one up tomorrow. Even though I didn’t really put up anything of substance now, that doesn’t mean I won’t be working on stuff tonight. I’ve got to go back over my notes, hopefully get some of my pictures developed and digitized, and draft the first day’s report. All that in addition to running to the grocery store (my brother was home this weekend and happened to empty out most of the fridge), preparing for my internship orientation tomorrow (gah!) and doing mundane things like laundry and such.

Lots of stuff to do…not a whole lot of enthusiasm to do most of it.

I will, however, leave you with a little tidbit from the weekend. This picture wasn’t taken by me. It was taken by one of the people who entered their work in the art show at Dragon Con. Take a good look at the picture and see if you can figure out what’s on the work table. (remember: you can click on the picture to make it bigger) 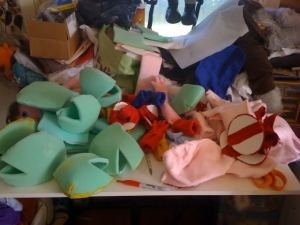 Know what it is?

Yes. That’s right. There were puppets at Dragon Con. A whole panel on puppets, in fact.