The things we’re supposed to enjoy. The things that get us down. The things we overlook. The things we do when we feel we can not do The Big Thing. The things that turn a good day into a perfect day. The extra, small touches on a costume or prop that takes it past a “sketch” and into a real cosplay. Many things, it turns out, can fall under the category of “the little things.”

I had a very physical reminder of this recently. A bunch of little things which, taken by themselves, with no kind of context or thought, would probably go unnoticed decided it was time to combine and make themselves seen. Or felt, as it were. A bunch of little things that prompted me to question and search, and it turns out those little things were indicative of something a little bigger than a little thing. I’m talking in code, I know, but these are the things one must put up with when one reads the blog of a storyteller who, despite liking to talk, also likes her privacy.

Suffice it to say, I was reminded that the Big Things in life are generally made up of a bunch of smaller things, and it is imperative to pay attention to these small things, lest they be trying to tell you something important. Like “ask your doctor.” Or “take the car to the mechanic.” Or “talk to the person, instead of just assuming you know what’s going on.” The little things are there to prompt us to action.

That’s the case with costuming and prop-building, too, which makes a considerable amount of sense, as so many elements of this strange hobby can be seen as lessons for the lives outside our workshops. Patience, creativity, and the importance of knowing when to read the directions first and when to say “screw it” and dive in are all things we experience in the midst of costuming, but they are not unique to that world. Sometimes, in order to surmount The Big Thing, you’ve got to start with the little things.

I’m going to have a lot of free time on my hands in the coming week, which is probably for the best. Generally, I reach the end of each week with no free time for myself and my projects. This week, I’ll be working on a number of small things – trying to get the ball rolling as we move ever closer to Dragon*Con. There are a number of Big Things I still need to do, which seem daunting when I look at them from WAAAAAAY back over here. The trick, you see, is to break them down into a bunch of small things. When you’re focusing on the small things, and moving from one little task to another, you don’t feel as overwhelmed as when you look at the big one. 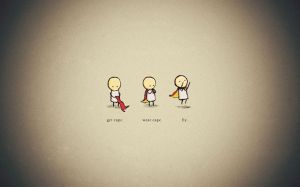