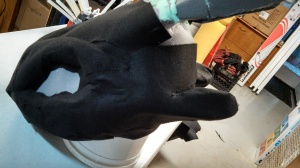 The final two weeks before DragonCon are well underway. There’s only one more weekend to go before the final week of pre-DragonCon craziness. Ideally, I would have had a completely clear weekend to finish all the work that has yet to be done on a particular dragon. That, sadly, will not be the case. A good chunk of Saturday will be interrupted by a jam session for a program at work (I’ve been tapped to sing for our Halloween-themed program, Twilight Tales, this year), and Sunday morning includes churchly duties. So, to make up for losing work time this weekend, I’ve decided to haunt the workspace at Robert’s house for a few days this week. I had been carting the head back and forth between Robert’s house and mine these past few weeks, working on it in both places. Of course, this is not ideal, as I then have to spend time setting the workspace back up again before I can actually get anything done. So…instead of fighting with the darn thing twice a day, I decided to leave everything at Robert’s, and focus on other things when I’m at my house. 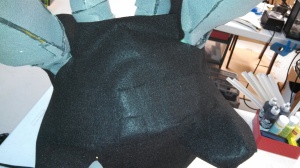 The head is even closer to being finished now. All of the felt “skin” has been hot-glued and sewn to the head, and I’ve started the long, tedious process of creating the scales on the head with three types of fabric paint. Covering the head with felt took a lot longer than I expected, even with having prior experience and a good idea of how long the work would take. The main delay in the process was the daggone horns that I had to deal with. With other heads, I was dealing with a fairly straightforward head shape. Even Kowl, with his distinctive eye ridges and tricky beak, was fairly simple by comparison. Toothless has six horns of various sizes, requiring a lot of shaping and contouring of the felt. There are far more seams on the head than I would like, but thus is the problem of cutting and sewing curves into the felt. 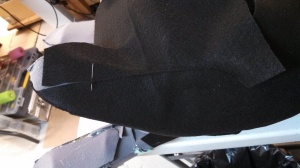 One of the things I recommend doing, after you’ve finished sewing pieces together on your own costume head (should you feel the urge to put yourself through this unique level of hell), is “combing” over the seams with your fingernail. This helps raise some of the fibers of the felt, and serves the purpose of blending – as much as possible – the two edges of the seam. Thankfully, a number of the seams can easily be covered with painted scales.

The eyes of Toothless are my main goal tonight. I’ve been struggling to figure out what material to use to create them. I do not have the ability to do resin casting for them at this time (though that’s something I’d like to try in the future), and I don’t think I’d be able to see through those spots in the first place. The current plan is to cut the eyes out of the domed tops of a 2-liter soda bottle. I’ve got paint to create the iris, and I plan on covering the pupil with some black mesh. That way, it will look black but still, with luck, allow me to see out of the eyes.

Oogie Boogie is all but done. I was finally able to work on the back closure last night, and it’s looking pretty good. I need to add a little more velcro on the back, and complete the shoe covers. I would have had the shoe covers done last night, but I realized that the only extra pair of water shoes I have are bright pink, which will easily show through the natural-colored muslin. So, I’m on the lookout for a nice pair of Water Doggers in white or cream, and then Oogie will be done. I might go back and add a little flap to the hands, so I can pull my hands out of the costume without taking off the ENTIRE THING, but that is not as pressing as finishing a certain dragon costume.

I’ve still got to figure out what other costumes I’m bringing along, as well. I’m certainly not making anything else new for this year – two new costumes will be enough for me, thank you very much. I do, however, need to decide which of my other stock of costumes I should bring with me. I know I’ll be bringing my Kaylee jumpsuit. It wouldn’t be Dragon*Con without it. I think I might also dig out my God (from Dogma) costume. It needs to be brought in a little bit in the top, but that isn’t a big ordeal.

I’m certainly on the more reserved end of the spectrum this year, in terms of how many costumes I will be bringing. I believe both Maggie and Heather are tied at eight. I don’t think I’ve ever brought that many costumes for a convention. Although we’ve got a host hotel for the second time in our history with this con, I don’t think I’ll be utilizing the location for costume changes. I think my great joy is going to be the ability to take a nap from time to time. A nap in an actual bed, and not just a corner of floorspace in the bottom of the Marriott.

I think the other reason I’m keeping the costume line-up simple this year is because of my “schedule.” I’m on tap for three different panels this year, and I want to be able to maneuver the halls and get between buildings fairly easily…and probably wouldn’t look as professional sitting in front of an audience, discussing folklore and mythology tropes in fantasy while dressed as a giant panda. If you are so inclined, I invite you to check out the following panels: