One of the milestones when you get to your thirties is a massive change in the statuses that appear on your Facebook feed. Gone are the days of undergrad whining, and parties, and various other “20’s-centric” posts. Instead, my feed has become inundated with posts about babies. And marathons, which I find interesting, but mostly babies. And cats. Cats are always popular.

But oh my stars, the baby posts! I can’t even tell you how many of my high school friends and former grad school compatriots are starting their own families now, because I don’t honestly think I can count that high without a calculator or losing my place. Suffice it to say, there are a lot of little ones being brought into this world by people I know. 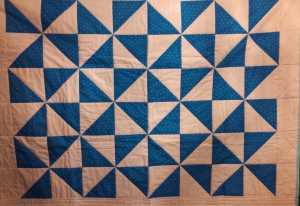 I’ve been trying to keep up with some of the births, in terms of crafting, though at times it feels like a losing battle. People! Stop having babies left and right! I can’t sew that fast. Of course, that’s not how it works, so I just try to do some simple things in the free time I grab. I started making a quilt last year for Chris and Kathleen, friends of Robert’s, who were expecting their own bundle of joy. I started making it a little after she was born. I finally got it to them in time for this year’s Christmas. I don’t know if I feel better or worse about the fact that it was actually finished in time for Christmas last year…we just didn’t make it down there. I kept holding on to it, thinking we’d take it down when we made a trip to visit. After all, Richmond’s not so very far away. But, as so often happens, life got in the way and, come Christmas 2013, we still hadn’t gone down to see them. So, I mailed it, checking the package tracking every 30 minutes. It arrived safely, and in plenty of time for Christmas cuddles.

The next on the list was a quilt for my friend Red (not her actual name, but that’s what we all called her throughout undergrad). She is due in the spring. I made a quilt for her and her husband a few years ago, as a wedding present. Ohio State colors, of course. I think it was my first “regular size” quilt. I figured baby-Red needed one, too. Of course, this one isn’t in the same color scheme.

Quilting on the back of the quilt for Red’s little one.

I went through my stash for both quilts, and found some wonderful color combinations. The good thing about making a baby quilt from stash is that you can use the beautiful fabrics that you always wanted to play with, but didn’t have enough of for a much larger project. Mathilda’s quilt was made entirely of fabrics that had been gifted to me. The blue/pink flower calico was delightfully soft, and so was perfect for a little one to snuggle.

For Red’s baby quilt, I pulled a blue/green leaf print fabric I had purchased several years ago. I didn’t know exactly what it would be used for, but I loved it and figured it might end up in a quilt that I actually kept for myself. Alas, I generally don’t keep the quilts I make, and the fabric languished in my stash for far longer than it should have.

I actually pulled out a number of different fabrics that had met a similar fate, when I was planning for Red’s quilt. Some of them were fabrics I had purchased, and others were gifts sent to me by a friend (thanks, Angelica!), and still others found their way to my stash after my brother-in-law’s great aunt downsized her own stash, prior to moving. I think the light blue fabric I paired with the print actually came from that donation. It was a nice, brushed cotton that went well with the blues in the leaf print. I was going to bind the edges with the same two-tone yellow that I used for Robert’s quilt (for contrast), but wound up cutting strips from the Black Watch flannel scraps left over from making a nightgown for Connie. The colors went well with what was already on the quilt, and the flannel makes for a nice fuzzy, soft edge for a baby to chew on. And chew on things they do. I remember my brother gumming the edge of his blanket when we were kids.

One thought on “Bairns and Babbies and Cherubs and Sprouts”