We’ve managed to get an incredible amount of snow here the past few weeks. More than any other winter that I can remember for a while. Just last week, we got about a foot of snow in little old Annandale. Everyone kept saying we were going to get monstrous snowfall…and I was just sitting there, thinking everyone was crazy. In fact, when I looked outside at 11pm Wednesday night, we had managed to get a WHOPPING 1/2 inch of snow. I chuckled, and celebrated the Federal government closing down in anticipation of the snow, and was thoroughly surprised to awake in the morning to 12 inches of wet snow, perfect for packing into snowballs.

I had a little bit of work with me at the house – mostly reading – but I wound up with a little extra time on my hands, and decided to be productive. I have a couple of fairly big projects on my to-do list (which I’ll be detailing here), and the snow day was the perfect time to get started on them.

Before I sat down to work, I spent about two hours clearing the driveway of snow – which my back regretted pretty much immediately – and then retreated back to the house and my nice, comfy pajama pants. My brother gave me a lovely Dr. Who bathrobe this Christmas, and it has become part of my “working in the frigid basement” wardrobe. Clad in bathrobe and turtle slippers, I tackled the first big project: a blue and white quilt top

A friend of mine from work is getting married this year, and I decided I’d get started early on her wedding present. I wanted to do a fairly simple pattern – something that wouldn’t take me an absurdly long time to cut out and piece together, so I could spend more of my time on the actual quilting. I decided on a simple design of alternating blue and white triangles.  Originally, I wanted to find a nice blue calico with flecks of white, and a white calico with tiny flecks of blue, but apparently that was out of the range of possibility. I visited three different stores – THREE! – and finally settled on what I managed to find at the Seven Corners JoAnn’s.

I have to say…I’ve been a fan of G Street Fabrics at Seven Corners for years, but I’ve been rather disappointed with their selection of late. It seems like they’ve largely gone away from selling a lot of fabric…which is strange for a place that purports to be a fabric store.

Anyway, I procured the fabric about a month ago, just in time for a massive fabric cutting session during the Super Bowl. Using a rotary cutter for the first time (a little daunting, at first), I cut out tons of blue and white triangles, and set to work stitching them together. I soon realized I hadn’t actually made enough, and had to go back to the store to pick up a little more fabric. Thankfully, they still had some left on the bolt when I went back! I had already sewn about half of the strips together (fifteen squares each strip, with thirty triangles total on each line), and the first order of snow day business was to finish stitching the strips together, then begin sewing the strips to each other.

I had some vintage blue and white calico (with little pink accents) in my stash that joined the project. I don’t know what it was originally purchased for, but there was a lot of it. At least four yards of it. Of course, it was a good thing there was so much to work with, as there were a few stains and holes sprinkled throughout. I planned to use the fabric as a border, to tie everything together, so I needed four long strips, about four inches wide. I cut the pieces I needed, going with the grain and avoiding the stains, and just barely had enough fabric for it to work.

Front of the patched hole

Of course, as I was ironing the strips and pinning them to the edges of the pieced squares, I realized there was a small hole on one of the strips. I set about patching it with a piece of fabric, and did a fairly good job. It wasn’t immediately visible when looking at the fabric. However, I knew they’d find it easily by

Trimmed back of the patched hole

touch, and I didn’t want that.

I cut out a little heart from a red flannel scrap I had sitting around, with the intention of stitching their initials or the wedding date on it. I asked Mom what she thought. She agreed that would work, and add a nice accent to it, but suggested I make the heart in white or blue, to go with the pattern. I took a scrap of the white from the quilt, made a second heart, and appliqued it over the tiny patch. I used some blue embroidery thread to stitch their initials on it. I think I’m going to save the red heart, and stitch it to the backing fabric in the same place, with their wedding date on it, just as an added flourish.

So, the quilt top is finished being pieced together now. I plan to stop at the fabric store tonight, to pick up muslin for the backing. I’ve already got some batting on hand – I’m going to test out a kind called “Fusiboo.” It’s a fusible batting made from bamboo. My hope is that it will take out some of the struggles I have with basting the layers, and that it won’t be as difficult to work with as the polyester batting I used on Robert’s quilt (which I have vowed never to work with, ever again) 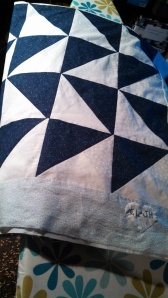