To be honest, I love my job most days. Not always all of the people I deal with in my job, but the job itself is pretty decent. I mean…if I get a little frustrated with something at my desk, I can walk outside to this: 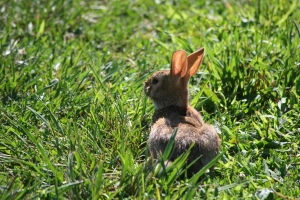 (Those are recent shots from my assignment last Friday, to go out and take some pictures of the site for our Marketing Director)

Even when you want to throttle a co-worker, it’s pretty hard to continue feeling murderous when presented with fresh air and open fields. And, despite not actually being one of the program directors, I have found myself (alongside two of my co-workers) in charge of one of our more popular program areas: Stitch ‘n Time.

Stitch ‘n Time is the volunteer-based textile club at the farm. They process all the natural fibers we grow and raise at the farm: cotton grown in the Museum Garden (white, brown and green), wool from our Hog Island Sheep, and even, occasionally, flax. It’s actually a bit of a pain to process flax, so we don’t do that one very often, but it has been done on the farm.

Personally, I’m a fan of the green cotton. It’s got longer fibers, which means it’s easier to spin on the wheel, and it’s just pretty. It’s naturally green. Naturally colored cotton – the green and brown varieties – were not grown for sale and trade on the big plantations. The plantation owners only wanted white cotton. The naturally colored cottons were grown by the enslaved populations living and working on the land. They were allowed to grow and process the cotton for their own use, as it wouldn’t interfere with the trade of the prized white cotton.

Of course, in the time period that we interpret here on the farm (1775), the enslaved population would not have been processing the cotton on their own to make their own fabric, for one simple reason: material goods like cotton and linen fabric pretty much all came from England (or from China and India, through England) at the time. In fact, the three most common imports from England at the time – at least for this region – were fabric, nails and rum, with fabric being first on the list. Williamsburg, which, by all accounts, was a pretty sizable town during the Colonial period, did not start producing cloth until 1777. Looms were not easy or cheap to come by, and a middling family such as the one who would have worked our farm would not have had the disposable income or the free time to use one. Spinning wheels were a possibility, though, and would have been used to spin the wool into yarn and cotton into thread.

Now, I’ll pause here and mention that we do actually have a loom here at the park, and I’ve been told that we used to use it quite a bit. In the two years that I’ve been here, though, it hasn’t been touched, except by curious little hands here for a school tour. Instead, it just squats in the corner of the Education Building, taking up space and looking difficult to use. It needs a fair bit of repair, but we can’t seem to keep any weavers around who would be interested in getting it back up and running.

We have a couple of spinning wheels, though, and those get a fair amount of use on a semi-regular basis. Since one of our most productive spinners left, Casey and I are both interested in picking up a new skill and helping to keep up with producing the materials our troop of knitters need to transform the rough materials into usable yarn for projects. I got to try my hand at spinning on the wheel for a few minutes, during the last club meeting, but I was also running hot water back and forth from the kitchen, for our wool-washing process, so I didn’t get as much time to practice as I would have liked. With any luck, we’ll be able to take a few hours later this week to really sit down and learn. 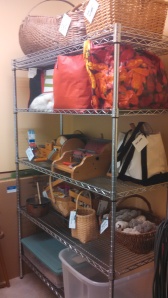 Yesterday was spent clearing out the small storage closet that was given over for Stitch ‘n Time materials (one of those small corner armoire pieces intended for small home office use), taking an inventory of what we’ve got in the way of tools and needs, and relocating the majority of the items to the nicer, more accessible metal shelving in one of the side closets in the Education Building. Everything now has a nice little tag on it, letting us know what’s inside each basket without having to take it down off the shelf.

We’re looking at getting better storage bins for the unprocessed wool. At the moment, they’re in the bags on the second shelf, but we’d like to get something more breathable, like milk crates. You don’t want to enclose the wool too tightly until you’re finished working with it, as it has a tendency to go rancid if there’s not enough air flow. We wash the wool, but there is still a good deal of lanolin present – which you’ll want, to preserve the wool, as well as it’s more water-shedding ability. That’s not to say that you can go out in a thunderstorm in a wool sweater and you’ll be perfectly dry at the end of it. You’ll just maybe be a little less damp than you would if you’d gone outside in a cotton shirt.

I like the days when I get to work with fabric and fiber the most. I think, probably, because I usually end those days feeling as though I was a little more productive. There was an actual finished project to show for my efforts, or you could at least see the physical progress. Taking over the Stitch ‘n Time events is one of the high points in my work day, at the moment. I’ve said before that I would love to sew or craft something all day and get paid for doing it, and this feels like one tiny step in that direction.