I have, yet again, been fairly absent from here of late. It is always my hope that I can get  back into the swing of more regular postings on here, but…life always seems to be set on full-speed-ahead. I have been working on things. I just haven’t been able to stop a moment and write about them. (As you can see above, both Alvin and Raven have been very upset about my lack of free time, as it means less belly rubs and head scratchings for them)

In addition to working (a lot…seriously, I’ve been spending entirely too much time at work), I’ve been on a tear to finish the wedding quilt I’ve been making. I’ve set myself the goal of getting it done in the next two weeks, which I don’t think is a crazy goal. I’ve finished the edge quilting on three out of four sides, and am about 1/4 of the way done with the quilting on the final edge. I dragged Mom along with me to the Quilter’s Studio the other day, as I wanted another set of eyes while I went through their inventory, searching for something I could use for the binding. I finally picked something (though there was a fair bit of back and forth before that happened). The fabric has been washed and set aside, and awaits being cut into diagonal strips and sewn together for the binding. I assure you, I’ll post pictures of the final product when I finish it. I am so looking forward to finishing it!

Of course, once I finish that quilt, it’ll be on to another one – or two, or three. More on those in another post.

The other big project on my to-do list at the moment are two crowns for our upcoming Food for Thought festival at work. It’s this Saturday, so I’m on a bit of a time crunch. The crowns are set to be awarded for our King/Queen Corn Costume Contest. Quite a mouthful, indeed! The idea is that people bring a costume that illustrates their relationship to corn, or says something about it…though, with no pre-registrations so far, we’d really settle for someone just showing up in some sort of corn-themed get-up.

I am set at the parade supervisor for the contest, making sure everyone has their contest registrations filled out, and helping to march them around the site after they are judged. I’ll be wearing my own corn hat, of course. It’s that very hat that got me into the situation of making the crowns in the first place. Knowing my bent towards all things crafty (and ridiculous), the folks in charge of this festival tasked me with making two corn-themed crowns: one for the youth category winner, and one for an adult.

The kid crown was the easiest. I drew a simple sketch at work, and then penciled the basic outline I wanted on a piece of

newsprint. I scoured my scrap bin, cut out the pieces, and got to sewing. Two and a half hours, a few scraps of white terry cloth and yellow and orange fleece, some scrap yellow broadcloth, a strip of felt, and some yellow and white rick-rack from the “gifted to me” stash. That’s all it took for this crown. If no one shows up for the kid’s category, I’m totally keeping it to wear around the rest of the festival.

The adult crown has been a little trickier. I wanted something that was a little…classier. Well, as classy as a crown depicting corn can be. I finally broke into my stash of Worbla and Wonderflex, to build the structure of the crown. I went with the Worbla for obvious (at least to me) reasons.

Here, I have it placed in an old wire plant hanger, to get the right basic shape while I heat the plastic.

I’m not sure how I feel about the Worbla itself, as a material. It doesn’t have the fabric “backing” that WonderFlex does, which I feel makes it a little flimsier when it gets hot. It does soften up fairly quickly under low heat, for that reason, but that can be a bad thing…at one point, I had the heat on it a fraction of a second too long, and it split apart like a piece of fruit roll-up. I had to reinforce the break in the band I was making with several other pieces of Worbla. I’m sure I would prefer it if I was doing more actual sculpting with the shape, but I feel like the WonderFlex is a better option if you’re looking for more structure. The corn chip finish does help offset the other problems I was having. It means I don’t have to provide a coat of paint under the raffia “corn husk” pieces I plan on adding. If the Worbla shows through, it will just look like corn chips, adding to the corny theme of the crown.

I did find one aspect of the crown’s shape interesting, though.

*This* kind of crown jewels. Not the other kind, you sicko!

In my mind, I had originally thought to make a crown shape similar to, say, the Crown Jewels. It’s got a very distinctive shape to it that I think

most Americans would recognize, despite the fact that we no longer have a stake in the royalty in England.

When I got to building it, however, I found myself gravitating towards a slightly different shape to the headgear. As I put the pieces together, altering my original plan as I fought with the Worbla, I realized that I was building the bones of a hat that is more indicative of indigenous culture. As it stood at the end of the first day of construction, it looked like the basis of a gustoweh.

Gustowehs have been worn by a number of different Eastern Woodland tribes, but are most commonly associated with tribes that are a part of the Iroquois Confederacy: Seneca, Oneida, Onondaga, Mohawk, and Cayuga. The Tuscarora, though considered adoptive members of the confederacy, do not vote in tribal assemblies, and really have a separate culture all their own, brought from their original homelands in the North Carolina region. The five original members, however, all shared the wearing of gustowehs, and individual tribes can even be identified by how they wear (or, in one case, don’t wear) the feathers on the hat.

The frame of a gustoweh…see the similarity to what I made?

Now, it is important that you realize that a gustoweh is not a crown, like those worn by royalty. It’s not even quite the same thing as the traditional headdresses seen in indigenous Plains culture. It is, however, a type of headgear commonly worn amongst several Eastern Woodlands tribes and, in some slight visual ways, resembles a crown. There are significant differences, of course. And you’ll notice, in the examples I provided here, the base of the headwear is covered by material and feathers, so you don’t actually see the structure underneath. This isn’t the case with all gustowehs, mind you. Sometimes the structure of the gustoweh is very visible.

In my case, I wasn’t intending to make a gustoweh. I meant to make a crown shape that would be more familiar to people used to seeing more European-styled headgear. And yet I started with something that very easily matched the cultural forms that I am most familiar with. I feel like there’s more here to write about (more than likely, much more than most of you would care to read), but I find it intriguing that this is the shape I unconsciously drifted towards, even with a specific non-Native example in my head at the time. 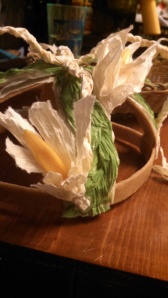 So…what to do. Like I said, I didn’t want to make a gustoweh for this event. But I also didn’t want to scrap the work I had already done. So I did my best to salvage the base of the crown and change the shape a little with the additions. I took some raffia from my stash and went to town. Some of it got braided and painted to look like greener corn husks and some I left natural. I picked up some corn cob holders at the store and wrapped them in a little more raffia (honestly, the raffia was the best idea I had), and made little ears of corn, complete with drying husks.

Mom suggested getting some thread that looked like corn silks and adding that to the crown, and I must admit I’d had the very same idea. But then I thought about the trouble of finangling fine threads, in addition to what I was already working on, and I decided “No Way!”

I hot glued some husk colored raffia to the supports and glued the green raffia braids over top. Then I went to town, sticking the little corn ears all over the crown, securing each with a little more hot glue. Still thinking it had a vaguely gustoweh-ish look, I made two more smaller raffia braids, and glued them on in a way that – I hope – changed the initial silhouette of the crown. Those got a nice light coat of gold paint, to set them off from the surrounding “corn husks.”

Originally, I had planned to glue a long piece of unraveled raffia around the base of the crown, to cover the edges of the braid, as well as the

bottoms of some of the corn husks (and to make it a little less scratchy when placed on a head). However, the plan changed when I realized I had inadvertantly used the long piece of raffia I had originally prepared and set to the side. I looked around the disaster that is my workshop at the moment – we’re still in the ongoing process of going through all of the boxes and buckets in the basement, and clearing out things we don’t need – and spotted some deep red felt that would be perfect. I cut it into strips, stitched the ends together, trying to make the stitches as small as possible. I used a thin line of hot glue to affix the edge of the felt to the inside of the crown band. As the glue dried I stretched the felt up and over the outer edge of the band, pulling it back over the top and whip-stitching it to the inner edge of the band.

Dad agreed that it still had a bit of a Native look to it, so I wrapped some gold crewel thread (again, something from my stash) around the band, going in both directions to form little “x” crosses on the band. A knot and a dab of hot glue and it was done.

I considered going back and adding a few dots of paint to the tiny corn holders, but by that time it was 11:30 at night – I was tired, still needed to shower, and had already been working on it for 4.5 hours that night. I took a final look at it and decided it was done. It still doesn’t quite look like the crown shape I think most people are used to, but I think it will work for the event. At this point, we don’t even know if we’ll have anyone in costume, so it might not make any difference!