I’ve written about my father before, for Father’s Day. And I had been writing about him again, more recently, for a post about sewing for men. I have deleted that one, without even finishing it, because I can’t fathom going in to write about those pieces at the moment.

Those who read this and know me in “the real world” have an understanding why.

Dad passed away a month ago.

It seems impossible that it’s already been a month. It certainly doesn’t feel like it. Of course, time – like so many other things – seems to have lost its meaning and logic. In the days immediately following that horrible morning, none of us could remember what day it was, or really even what time it was. It took me a week to finally manage eating three meals in one 24-hour span of time. I’m still struggling with that.

This isn’t the first big loss I’ve been through. That would have been Gramma, 20 years ago. I’ve always known that, life being what it is, there were bound to be more big blows along the way (and there have, particularly recently), but this feels insurmountable.

Maybe it’s because this one didn’t come at the end of a long illness. There was no period of preparation, insomuch as preparations for such a loss can happen. It was just sudden, swift. We’d had big scares at the hospital before but, Dad being Dad, he’d always pull through, making some goofy joke along the way to lighten the mood.

Instead, a night of worry and shock and the terrible period afterwards. Walking out of the hospital into a new day

where the sun seems too bright, but it’s mostly because you’ve been shut up inside those long, antiseptic halls since 9 the previous night. Coming home to a too-quiet house, where the TV isn’t blasting CNN or the History Channel for three hours at full volume, and people sit on the floor amongst the tufts of cat hair rather than sitting in his chair.

People keep asking how I’m doing. I don’t know how to answer. I shrug and mumble and try to smile but how do you answer that? I mean, they can’t really expect an honest answer.

Oh, you know…wind out of my sails and rudderless. Adrift. I can’t remember to eat or drink anything. Cried myself to sleep five times this week, rather than the six of last week, so maybe that’s a good thing, but then I cried the whole drive home from work yesterday, so maybe not as well as I thought.

No one really wants to hear that, but everyone keeps on asking. Just stop asking, I want to tell them. Assume I’m not doing well, give me a hug if that’s our kind of relationship, and make me a cup of tea. Or slip me a granola bar because you know I’ve not eaten breakfast or lunch or what meal is it supposed to be anyway? Don’t ask for details on what exactly happened or caused it, as my boss did on my second day back at work. It doesn’t matter. That won’t help to process it, at least not for me. He’s gone, and it doesn’t matter whether it was his heart or a blood clot or whatever other insidious cause. And don’t tell me it was his time because I don’t believe in specific deadlines for people’s lives, and don’t tell me “God called him because he was needed,” because that makes it sound like he wasn’t needed here.

That’s really the main thing no one tells you…how to respond to that stupid question that everyone asks.

They also don’t tell you that you’ll forget, occasionally, that anything has happened. I don’t mean those occasions when you wake up in the morning and, for a split second, there’s a beautiful moment when your brain isn’t dwelling on the awful loss and you take your first breath of the day without crying, only to remember, Oh yes. That person is gone.

I’m talking about going about your day, knowing something is missing, conscious of the fact that things have changed. But then, randomly, you’ll be doing something and think “Haha. I’ve got to tell so-and-so that joke,” or some such thing. That happened just the other day. I was cutting an avocado and thought, with a little bit of concern “Wait! We didn’t ask Dad what he wanted on his pizza.” And then I remembered why.

They don’t tell you about how you’ll simultaneously want to talk about someone and yet not want anyone to mention them. You’ll want to tell stories, but at the same time you can’t bear to hear people talk about how awesome or funny or important that person was.

They don’t tell you how music on the radio will leave you weeping in your car on the way home. I don’t mean songs that had significance with that person, or that talk about death and grief. Because Pharrell’s “Happy” is in no way about my father or the loss of a parent, and I just can’t hear that song at the moment without it eliciting a lump.

And they don’t tell you about the little things that will make you cry with their beauty and simplicity, even as they help you on that long road of healing.

The other day I talked about Dad watching Kung Pow in the theater, back when I worked at University Mall. I had gone up to the projection booth to start another film, and the credits for Kung Pow were running at the next machine over. I could hear Dad, down in the darkened theater, laughing hysterically. At nothing. The movie was over, the credits were rolling, the employees were sweeping up trash, and he was still laughing, five minutes after the last joke had ended. And I could hear him, all the way upstairs, behind thick cinder block walls. 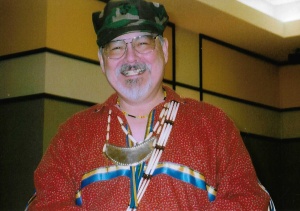 Bill, one of Robert’s cousins, said he was jealous. I must have had a quizzical look, because he continued. “To be that mirthful,” he said, “to still be laughing five minutes after the movie ended…that’s something.”

And it was. It is. And, sometimes, it’s the only thing keeping me together.

That someone who had never even met Dad could see that, and recognize the impact that kind of person can have on the lives around them…that’s something.

I’ll always hear my father’s voice in my head. That much was clear on a recent trip in the car with him, when I realized that my interior monologue has the same cadence and emphasis that Dad’s voice did. I’ve got messages from him on my phone, and several tapes of him telling stories and talking with family. That doesn’t necessarily make all of this any easier, but it’s enough to remind me that his voice isn’t completely gone from this world.