Thanks to a very generous gift from a co-worker, I now have a spinning wheel!

I’ve been spinning on a drop spindle since May (and getting better at it, I think) and had my first opportunity to try my hand at a wheel a few months back, at one of the Stitch ‘n Time meetings. I had started the search for wheel plans, thinking I might try to make one out of some at-hand materials. I’d actually found an interesting plan for one – the Thrifty Fox spinning wheel. (Isn’t it cute!) The only things holding me back from committing to buying the construction plans were the size (I was looking for something that would be a little more compact) and the fact that it was a spindle machine, instead of one with a flyer. Not being well-versed in wheels, I wasn’t sure I was ready for that type.

At the last Stitch ‘n Time meeting, Polly mentioned that her sister had recently purchased a new wheel and there was not really any room in the house for three wheels. She was thinking about donating it to the club and I joked about it disappearing into my car en route to the Education Building. Fast forward two months, and I walked into the front office to find a delightful little Ashford Traveller wheel sitting next to the filing cabinets. Polly came in later and said I could have it, if I wanted.

If I wanted. A spinning wheel! Of my very own!

The wheel was in an almost-ready-to-go state. It just needed a new flyer, and could use some new bobbins. Since Ashford wheels are made in New Zealand, there seem to be fewer brick-and-mortar places that sell the parts needed. However, they are easy enough to get from The Woolery. 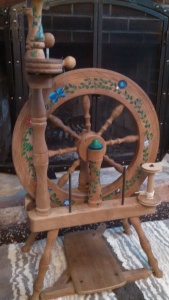 The wheel is the perfect size and set up for my basement work space. It’s a design style called “castle,” and it is certainly reminiscent of a castle tower. The mother of all (the part that holds the working assembly made up of the maidens, the flyer, and the bobbin) sits to the top of the wheel, a little to the left, instead of beside the wheel, as in most traditional spinning wheel assemblies. It’s a single treadle (you can see it there at the bottom), but a double drive…which means a little more to spinners.

I know, I know…you know nothing about spinning and I’m just confusing you with jargon. Perhaps I’ll come back and do a pseudo-tutorial on spinning wheels…mostly as a way of teaching myself.

For now, the wheel is set up, and I’ve started spinning with the sole bobbin that came with the wheel. I’ve had a lot of practice drafting and spinning with a drop spindle, which I feel helps a little when switching to a wheel, but there’s still a learning curve. I haven’t managed to completely replicate the fine, even spinning I did with the Hog Island wool, on Casey’s wheel. Of course, part of that might be that I’m trying to spin on a new wheel using Merino. Why is that a problem, you ask? Well, it’s not as easy to pull apart as Hog Island wool (it’s got a longer staple), so it seems to be a little less forgiving for me than some of the other varieties I’ve worked with. I’m curious as to whether prepping the roving in the drum carder first would help my difficulties.

I’ve found a couple of plans online for 3D-printed Ashford-compatible bobbins. And, whaddayaknow…I happen to know a guy with a 3D printer! So having enough bobbins on hand to spin and ply shouldn’t be a problem. Plying should also be made a little easier by a neat little design aspect of the Traveller – it’s got its own built in Lazy Kate! This means I can just pop the bobbins with the singles on the little metal bars on the front of the wheel, and ply them onto another bobbin. Plying on drop spindle has proven, so far, a bit difficult. I need to work on figuring out a good makeshift tensions Lazy Kate for my spindles. Plying on the wheel, however, should (*fingers crossed*) go a little smoother.