Cat inspection: This was back when we had Onyx. Isn’t he tiny and cute?!

About a two or three years ago, we rebuilt the downstairs bathroom. Years of water damage from a combination of poor construction and old pipes had taken their toll on the walls and plumbing, and we had to knock everything out and basically start from scratch. Rebuilding studs, rewiring electric, new toilet and sink…the works.

A large part of the downstairs bathroom – the shower area – has still not been finished. We took it about as far as we could before we realized we needed professional assistance for the shower. We still have been unable to find someone who could fix this for us, but ONE DAY! One day it shall be done.

Trust me, it looks better than this at the moment. This was before we spackled and painted and added shelves above the toilet.

In the meantime, we’ve had a fairly serviceable bathroom. It’s wonderful having a working sink and toilet in the bathroom again, and I’ve been happy that emergency repairs to the house haven’t been needed this past year, while we’ve been struggling to get our feet back under us and adjust to the massive change.

That is, until Wednesday morning, when I stepped towards the dresser in my room to get socks out and discovered, to my dismay, that the carpet was wet. My heart sank.

Technically, I suppose the leak started the night before. I remembered feeling water on my sock after standing in front of the sink that evening, but I chalked it up to someone spilling some water on the floor while washing up. There was no evidence at that time that there was a larger problem.

Unfortunately, I discovered the damp carpet just as I was about to leave for work. I took a few minutes, trying to scout out where a leak might be coming from, but I couldn’t figure out whether the water was coming from the toilet, sink, or the non-functioning shower pipes. All three are on that side of the bathroom, so it could be any one of them…though I had my bets set on the toilet, as the majority of the dampness seemed to be closer to that side of the room.

All day at work, I fretted about my floors and walls and what could possibly be the cause of the leak. And I worried that I was going to have to pull down the walls we had worked so hard to rebuild. I really did not want to take that wall back down.

The other option was to approach the leak from the other side of that wall. One of the walls in my bedroom shares the wall with the bathroom…the same wall where the toilet, sink and shower pipes are situated. That wall needed to come down at some point, anyway. It had been damaged by the original leak upstairs as well, though not to the same extent as the old bathroom had been.

Of course, removing that wall meant moving the giant dresser and mirror in front of it, as well as pulling up the old carpet, and disrupting one of the few quiet places I have to relax in. In the end, of course, it’s a small price to pay for actually being able to live in my room, so I started the process of moving the dresser. My bed was soon covered in random things from on top of the dresser (as well as a few of the drawers from said dresser). 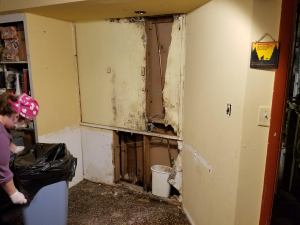 See that wall? It was hidden behind *another* wall. I had to peel back the other wall to get to it.

Once I could get back to where the leak was obviously coming from (and stand on the increasingly squishy carpet – blech!), I had to do the preliminary demolition. The previous owners had attached a giant piece of pegboard to the wall (for reasons beyond my understanding) and I had to peel that away from the wall first, in order to get to the actual wall. Once the drywall was revealed, I got my first look at the surface damage. Lovely black mold. Wonderful. I took my trusty sledgehammer and got to work. I tested the wall with a few bangs from the hammer and figured out where the drywall seemed to be the weakest – a clue to where the leak might be on the other side of the wall. It was alarming how easily some parts of that wall fell apart. I knocked out a section of the wall and spotted moisture running down the side of a pipe. Aha! I had the right pipe…now to find the actual place where it was leaking!

A few more smacks with a hammer, and I came up to where the water seemed to start on the pipe. A spot of green oxidization seemed to be the best indicator of where the leak was. When I wiped the pipe with my finger, trying to figure out just where the leak was, the hole actually got bigger and a fine spray shot out of a teeny, tiny hole on the pipe. I patched it the best I could with some old plumber’s putty and some duct tape, but this mostly just redirected the leak so it would continue moving down the pipe and into the bucket I placed there.

Temporary solution, of course, and one which meant I had to remember to empty the bucket before I left for work the next morning.

Of course, the bedroom smelled absolutely lovely by then, and my bed was covered in stuff anyway, so I spent the night out on the futon in the downstairs living room. Alvin joined me for most of the evening – he really likes when the futon is set up. I think it’s because it’s easier for him to jump up on it than it is to jump on my bed. 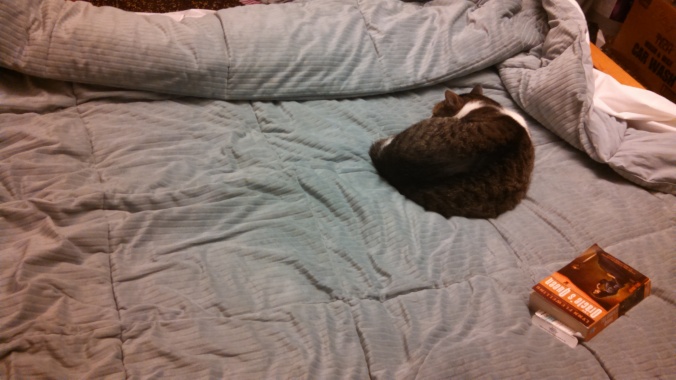 Mom had a plumber come out on Thursday to fix the pipe while I was at work, which eased my worry a great degree. We’ve redone plumbing in the house ourselves, but it’s kind of nice to have a licensed professional do the work for you. He said a pinhole leak like the one we had could do that kind of damage slowly without us ever noticing it. And, indeed, we hadn’t when we originally had the wall open for the other repairs (the leak was on the other side of the pipe, and we couldn’t see it).

Robert helped me knock out the rest of the old wall. Now we get to start the process of rebuilding. Thankfully, we’ve had a lot of practice putting up drywall – and we’ve even got some drywall left over from when we did the bathroom renovation! So we might not even have to go to Home Depot this time!

Having said that, I’ve probably jinxed us. Of course, going to Home Depot would mean I can pick up new paint for the walls. I think I’m going to go with a very light dusky purple.