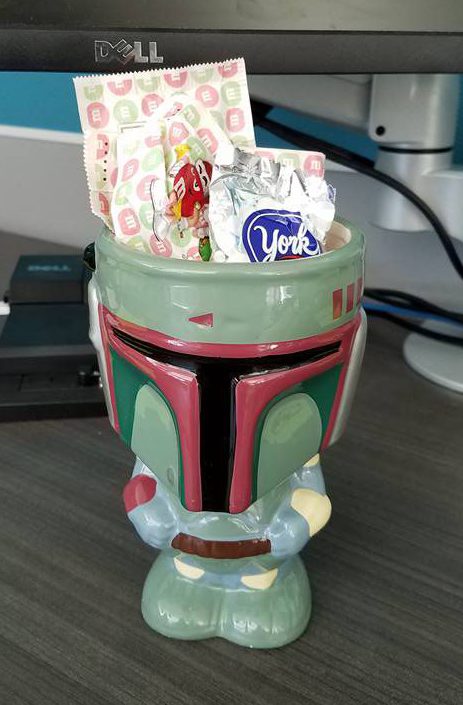 Shortly before Christmas break hit, I arrived at the office to be greeted by this little fella on my desk. I chuckled and grinned, and took a snack from his head (it’s not as gross as it sounds…there was candy inside). I then proceeded to try to figure out who could have left him on my desk.

You see, I was the very last person in the office the night before (besides the cleaning lady, and I doubt she left it), and I got in earlier than most of the folks I figured might have done it. I did ask around, doing my best to base my guess on likely culprits, but no one copped to it.

It drove me a bit nuts, because I wanted to let them know how much it was appreciated (also, to be honest, I’m used to being the one who does that kind of thing, and it surprised me that someone thought to do it).

I never did figure out who left it – either I was way off in my guesses of who-done-it, or the person was really good at pretending it wasn’t them. At any rate, it is a delightful addition to my Star Wars collection, and I have plans to drink out of Fett’s head when the candy supply has dwindled.

Of course, the whole thing got me thinking about the people who have helped to shape this year into a better run than 2015 had been. I know that the process of watching someone grieve is uncomfortable for a lot of people – believe me, nothing is as uncomfortable as actually going through it. The person I was will never truly return, because my father will always be dead. I will always miss him. The person I am now will always have at least a little bit of that sadness, lingering somewhere close, but I still delight in the absurd, and I still generally try to look on the bright side of things.

I’ve been making new friends here at work, but I’m not as close to any of these people as I might be in a few years. And yet, someone knew that this season might be difficult for me, that this might brighten my day, and that this little sign of support would be appreciated – even if I don’t know where it came from. I don’t think it’s solely because this is a Native place, but I think that probably has a good deal to do with it. None of these folks knew my father, and they don’t yet know Mom and the close bond of the Nicholas clan, but they know the power of family – both the ones you are born into and the ones you make – and that has helped a great deal this past year.

Those little gestures that so many people think don’t make a lot of difference in the grand scheme of things? They really do. The thought does count.