[Fair warning: This is one of those longer, semi-rambling posts]

And by “interesting finds” I mean hilariously bad or scarily decrepit houses.

It got so I could see an exterior shot of a house, and tell you how long it had been on the market, and some identifying features of it — because I had seen it several times before. As time wore on, I started working on fun descriptions of each house.

There were some I was convinced housed the buried remains of a serial killer’s victims; another where the owners had not only painted/wallpapered every room in a different color/pattern, but had put a different type of covering on every. surface. of. a. single. room. (I’m not exaggerating…it looked like there was ceramic tile on the ceiling, and shag carpet on the floor, and linoleum on the wall, and each flat surface was a different color and material).

I’d draw a neat little outline on the map, type in a couple of search parameters (# of bedrooms, # of bathrooms, no condos or apartments, etc) and then sort through a giant list of houses. The wonderful thing about Zillow is that I can just scroll down a big list with pictures, waiting for my eye to catch on something. This was a huge time-saver. I didn’t have to stop and look through the pictures of a house that had the curb-side equivalent of a port-a-john (And, yes, there were a few that would fit that description).

It was all in good fun. A nice little hobby. Something with which to occupy my lunch break on slow, rainy days. I would break it down by towns: Woodbridge, Fairfax, Springfield, etc.

Until, one day, something changed.

One day, I woke up, and the house search had become something more. It had become an actual house search. Not just a way to fill time. Not an ongoing joke. Somewhere along the way, we had decided…it was time to buy a house. It happened pretty quickly, really. One day we were visiting open houses on a lark, the next we were connecting with realtors and setting up viewings. We had a two-part litmus test for picking a realtor: did they talk only to my mother (who accompanied us to most of the viewings), even though Robert and I were the ones buying the house? and did they talk only to Robert and not to me, despite the fact that we were both putting the money into the house?

If I’m completely honest, we really found our realtor because of an empanada truck.[We attended an open house around the corner from the church on Mother’s Day this year – partly because “hey, open house near the church!” but mostly because “they’ve got a food truck…I wonder if you get free empanadas if you go to the open house?” (spoilers: we did). We talked about that damn empanada truck for months. When we stopped into an open house in Burke in September, we immediately recognized the listing agent from the previous open house — affectionately referred to as “the empanada truck guy” — and he remembered us. We signed up for a newsletter thingy, and one of the other agents who was there connected with us the next day. And that’s how we came to work with Willans…and use the word “empanada” more times in a single paragraph than I thought possible.]

That second open house with the empanada crew (I used it again!) was the real turning point. We liked Willans. He got our sense of humor, he was often available on short notice, and we noticed he was very thorough when checking if a house was structurally sound and not poorly finished (when we had pointed out some legitimate safety hazards at another house, with another agent, he had sort of hand-waved away our concerns).

Over the course of about two and a half weeks, we ended up seeing a fair number of houses. In early October, we made our first offer on a house that was just down the street from where I currently live. It was close to the grocery store and Home Depot, both of us could easily get to work in the morning, and it had everything on our “must have” checklist and more. We thought we had it in the bag!

And then we lost out on it.

I won’t dwell on that here, other than to say I went through a couple of those grief stages. We actually worried that we wouldn’t find another house that we liked as well. Most of what we were seeing on the market was a variation on one of three basic floorplans: a split-level (with varying degrees of success to how they had added a shower to the basement bathroom), a split-foyer Colonial (which we immediately decided we didn’t like), and a style we learned was called a Northern Virginia Rambler because they only make them in a specific area of Virginia (if you’ve viewed several ramblers in the Springfield, Va area, you’ll recognize these instantly…with their central pass-through fireplace, dividing the kitchen/dining and living areas). There were a few other styles – a bi-level Colonial (nope) here, an early 1900s farmhouse there (neat, but needed a lot of work),  but those the market is flooded with those three main styles.

What were we looking for? Well, we would have loved an American foursquare.

And a number of these are actually found in Northern Virginia…in Arlington…and waaaaaay out of our price range.

(Smaller versions are often listed as arts and craftsman bungalows…still pricey and hard to find in our ideal neighborhoods).

We thought we might slow down our search a bit after losing what we originally thought was our perfect house. I think we just wanted our evenings and weekends back, but part of it was probably also just the exhaustion and depression that accompanies looking at the same three houses day-in and day-out.

The Sunday before the Halloweenie Roast, we had originally planned to go out to a couple of open houses, and then hit four or five other houses in the late afternoon/evening, with Willans. We ended up not going to any of the originally planned open houses (again, exhaustion and depression). It was almost past typical open-house time when I spotted a new-ish entry on Zillow, and showed it to Robert. It looked promising, so we hopped in the car and headed out to walk through it. It was a neat example of an L-shaped rambler…another common floorplan that we had just discovered earlier that week. It had a separate section for Mom, so she could have her own space but we could easily check on her. It was all on one level. It had a great entryway. And it was in our budget. It swiftly moved to the top of the list.

The other houses we saw that afternoon included: the tallest tub we’ve ever seen, ripped up floorboards in the living/dining area which indicated a severe leak had happened recently, a weird shower built (sort-of) in the middle of a basement, a house that seemed very quiet but opened onto the ocean-like roar of 395, a house that looked like it was straight out of the 1980s and smelled like mothballs (but had a really neat wooded backyard that included stream access and an “island”, and a house with a weird serial-killer-like “playhouse” in the back. Oh, and also the cutest 1930s Cape Cod revival, on over half an acre.

I know it doesn’t look like much from here, but TRUST ME!

The Cape Cod was a late entry to our list that day. It had just dropped down to our budget area, and the pictures…didn’t really do a whole lot for it. But I saw something I liked, and I asked Willans if we could get inside to see it.

One of two living rooms; this is the “quiet” one, where one will likely go to read.

And that was that, really. I know a lot of people like to say “there’s no such thing as ‘love at first sight’,” but I’m here to say there is. And it’s possible for the object of affection to be a house.

Everywhere we went inside, there were little signs that this was the one: folk instruments in the front room, wood-working tools in the basement, a sewing machine and wall-mounted ironing board in the room I liked for a sewing room, canning jars tucked away in the attic, a whole wing for Mom. Out back, there was a deck (which, honestly, needs a bit of work), and a flat area for a fire pit, and an apple tree, and a bit of woods with trails built in, and a garden of wildflowers, and bird feeders…and a patch of fig trees.

It had been an on-going inside joke during our entire search. “Where will the fig tree 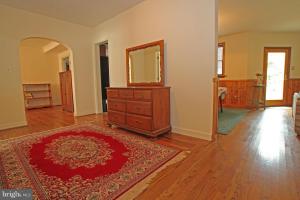 While this hallway isn’t technically a room, it’s our favorite place in the house. You can see the edge of the back living room.

go?” or “I know the floors slope into the closet and if you open the oven door you can’t leave the kitchen, but it’s got a fig tree so this is obviously the one.” I can’t even explain to you why the idea of a fig tree was so important. I don’t have the right words. It just was. So, there I was that Sunday, standing in the midst of a garden I knew was beautiful in the spring, amidst bird feeders and trails my father would have loved, and I looked to my right…and stopped.

“Are those fig trees?” 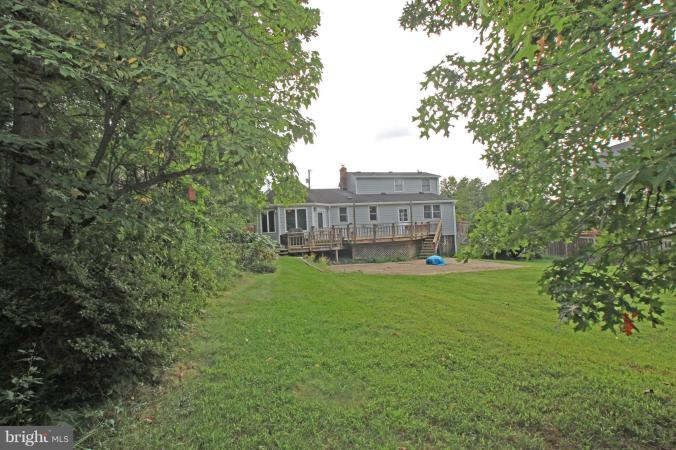 You can’t really see the fig trees from here, but they are there, just to the left of the back deck

I think that was the exact moment we decided we had found our house. There were two other houses on our list that evening, and we went like the dutiful house-seekers we were, all the while knowing…we’d found our house. Willans called the seller’s agent and learned there was already an offer on the books, with a second one expected any moment, and we put in our offer that evening, along with a letter to the seller. The next day, we learned that the first offer had countered…up to our original max budget.

The message came through while I was at work, and I closed my office door, turned my chair around, and cried. I called Robert. “I don’t know what to do. That’s our house.”

I messaged Mom. I learned later that she also cried and said “But that’s their house,” but all she wrote back was “POOP!!”

We made the decision to counter with a little more, using a back-up cushion that we had saved. The next day, we got the news from Willans.

“Congratulations on a ratified contract!”

Over a whirlwind few weeks we got our paperwork in order (so much paperwork!) and met the seller (Christine): she invited us over for a tour of the house and gardens. We’ll be only the third set of owners in the house’s 83-year life. The original owner built Franconia Elementary School, around the corner, and used some of the leftover bricks when they built our house. When the school was renovated in the 1980s, the school secretary invited Christine over to get some more bricks, which she used to create a patio in the woods. She left us a black-and-white photograph of the original house, as it looked in the 1930’s, along with some of her wood-working tools and an instrument that her husband had been making.

It’s been an incredible whirlwind, this entire house-hunting adventure, and now we begin the next stage of our lives in a beautiful home that is filled with lovely memories of love and family.

One thought on “Finding Home”