I’ve got so much catching up to do, in terms of the things I finished off my “travel to-make” list. Everything’s all sewn up…I just didn’t have pictures of anything. This week, my goal is to post something every day, just to get them out into the ether, once and for all.

First up: the dress and sweater I made for our Scotland trip.

This was the first sweater I made for myself, and only the third sweater I’ve ever knit (the first two being for my nephews). It’s the Carbeth sweater, from Kate Davies Designs. The minute I saw the pictures, I knew I had to make one (I also really want a long, heavy wool tartan walking skirt, and a beautiful Scottish loch to photograph it by, but that will have to wait).

I bought the yarn during my trip up to Minnesota for last year’s Native American Literature Symposium. I went directly to Needle and Skein from the airport, to pour over the yarn, before I even headed to the hotel. It was a really difficult decision, but I finally opted for The Fibre Company’s Arranmore Light, in Shamrock. I had originally hoped to find a local wool, but they didn’t have enough in the right weight for the sweater, so I went with the bright, cheery green from an Irish company.

I loved working with this yarn. It’s got a wonderfully tweedy quality to it, so there are little flecks of additional colors, instead of being a single solid shade of green. The flecks are less obvious from a distance, but make for an interesting study, up close.

The sweater came along pretty quickly. I added some length to the body (Carbeth is designed to be a cropped sweater, but those tend to look weird on me), and took some length off the sleeves, as I didn’t want to double the cuffs up. There’s a slight hitch in the center back, where the decreases for the left and right side meet, but other than that it turned out quite nice.

This is, of course, a hand-wash only kind of sweater. Robert has been instructed to never put it in the washing machine, on the off chance it somehow gets misplaced in the hamper. 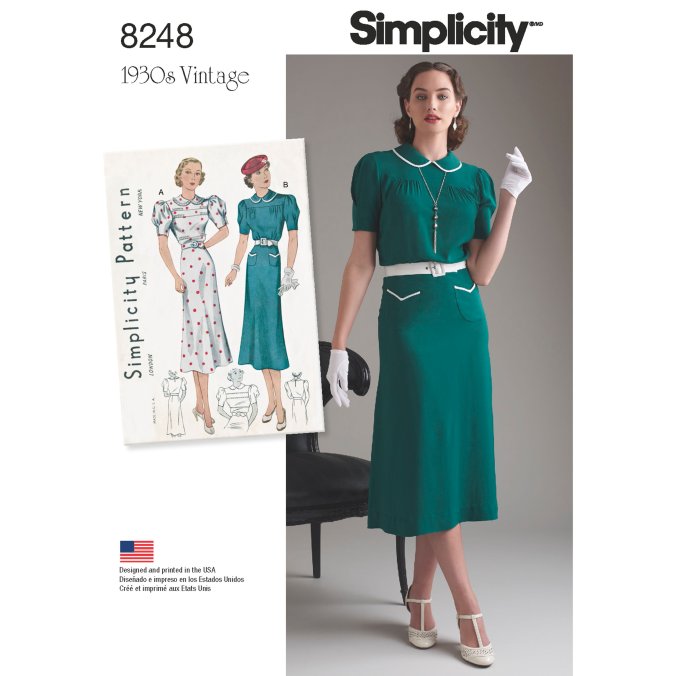 This is what I had originally planned to wear.

Originally, I had planned to make a 1930s reproduction dress for our Scotland trip. I thought it would be a great opportunity to match my wardrobe to the age of the house we were staying in. I took a repro Simplicity pattern, graded it, made a muslin, appeared to have the right fit…and then something, somewhere, went wrong. It had all kinds of problems, and I knew I wasn’t going to have time enough to figure out where I messed up, and correct things.

By that point, I had less than a week to go before we left (really more like three days), and I didn’t want to push myself and get exhausted, so I knew I needed to go for something simpler. Something that I knew I liked the fit of, and that wouldn’t take a whole bunch of fiddly work.

Enter, the Cashmerette Lenox Dress. I’ve already sewn three of these, so I know the fit and construction pretty well. Of course, I still managed to mess up the order of everything and sewed the sides of the bodice together before putting on the sleeves, but that’s not important! What is important is that this thing goes together pretty easily now, so it was the perfect option for a last-minute Scotland dress.

I had a couple yards of this mustard yellow sheep print, from Cotton and Steel. If I remember correctly, I had just under four yards, which is less than the pattern recommends. Since I planned to use black linen for the waist, collar, button band, and sleeve bands, this wasn’t going to be a huge problem, but it did make for a bit of stress when laying everything out. I ended up needing to piece a very little bit, for the inner button band and under collar, and use a different fabric for the inner yoke. That last wasn’t a big issue, though, as I’ve started using contrasting fabric for the inner yoke on most of my makes, anyway.

I just so happened to have the perfect fabric for the inner yoke of this dress. I think it evokes the Scottish countryside nicely. Of course, the one person who will ever see this is me, but that’s what makes it even more special.

Since I was cutting things so close (I mean, really close…I almost left the house too late to check in for the flight!) there were a few things that had to get packed up to be finished when we got to Scotland: attaching the sleeve bands, hemming the skirt, and sewing on the buttons. I packed some thread, needles, and a small pair of blunt-nosed scissors (that almost kept us from making our connection in Heathrow!).

I ended up finishing up the dress one afternoon, while sitting on an old chair in the hallway outside our room, in the baronial mansion. It was the only place in the house that had both fantastic light, a place to sit, and semi-private quiet. But, more importantly, I had to station myself there so the kids wouldn’t run into the room where we were staying, while Robert was trying to take a nap. 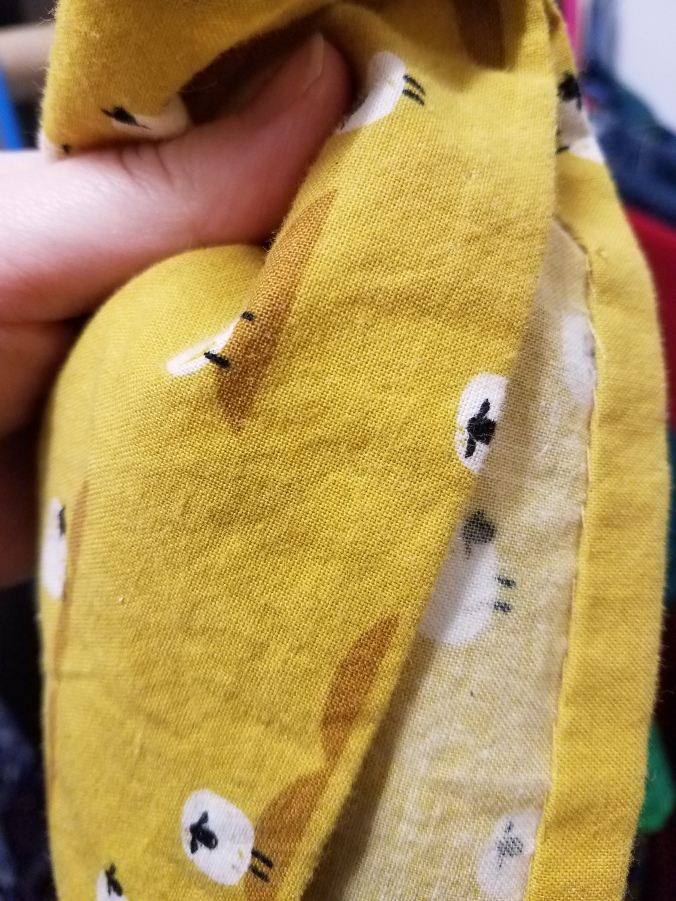 It is one of the best, most discreet hems I’ve sewn in quite some time (Robert kept trying to look for where the stitches were, on the outside). I have the intention of going back over the sleeve bands with a machine, and stitching on some hem facing, just to protect the linen from fraying, but they are otherwise fine. As for the buttons…I had brought along some buttons from home, but realized that they were just a tad bit too small for the buttonholes I had sewn. I figured I would be able to pick up some buttons in Scotland, to finish the job.

This proved to be a bit more difficult that I anticipated, as I couldn’t seem to find any craft shops within a “close”** distance to where we were staying. In the end, I happened to take a stroll into Alness, down a path that ran along the river from the back of the grounds of the estate, and Robert and I found ourselves at a building that was part museum, part visitor center, and part thrift shop. I found a lovely stash of vintage buttons that were the perfect size, and that matched the color of the little hills in the sheep print. I bought the lot of them for less than a single card of them originally cost. We walked home and on they went! Now, the dress I made for Scotland also has a souvenir from Scotland. 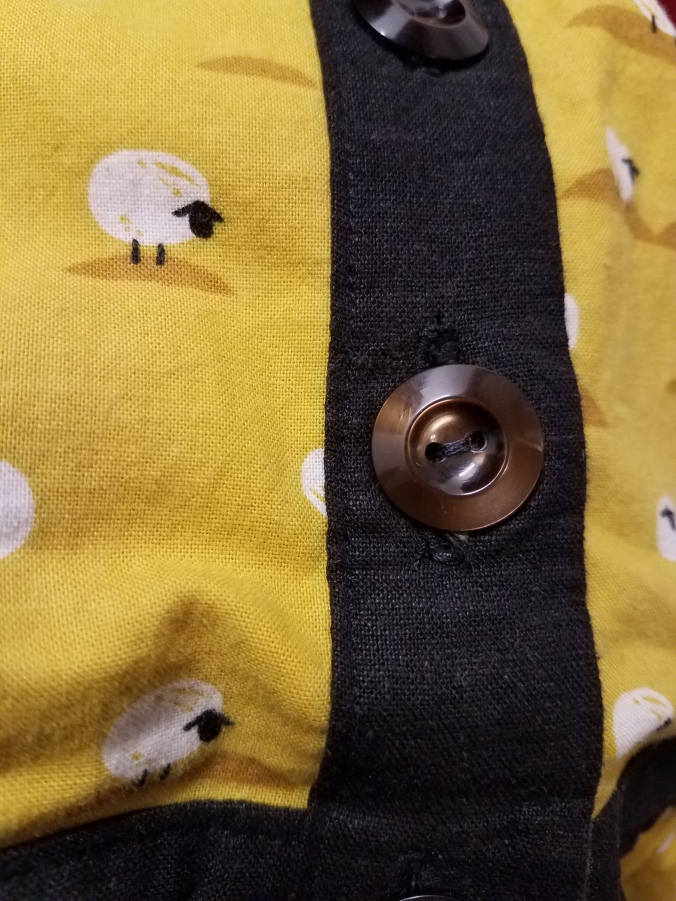 I’ve worn the dress several times since, and always get compliments on it. Funny enough, most folks don’t realize it’s a sheep print until they’ve been talking to me a good long while. I plan to wear the dress this April, for Lattes with Lambs, out at the farm.

I’m also quite loving that the dress is in Hufflepuff colors!

**I put “close” in quotation marks because it is a word that has rather different meanings in Scotland than it does in the States, in relation to distance. When we originally looked for a place to stay during the trip, a bunch of the options we presented were met with “That’s really far away” from the Scottish contingent. It was, at most, 20 minutes. Which, if you live in the States, can be anywhere between 1-5 miles, and is a walk in the park. I mean, literally, I’ve walked to parks that were about 20 minutes away. I have learned, however, that folks in England, Scotland, etc have a different sense of what is a long trip. We think nothing of taking a two-hour car trip on a random Saturday morning. Not so, we learned, across the ocean.