A little background on me 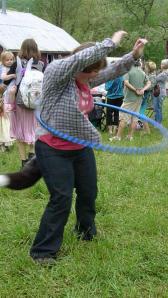 My first “real” job (not counting cat-sitting) was working as a costumed character for a local pizza place. I found out about the job through my theatre teacher and got it because I was one of the few people short enough to fit in the costume. The costume was rented, hot and clearly wasn’t laundered regularly. We took our breaks in the giant walk-in freezer and downed glass after glass of free iced tea. I started learning the basics of costume construction and design after that but I didn’t begin costuming in earnest until a few years later.

When I started college I began working at a second-run movie theatre as a projectionist. It was heaven. A dirty, cramped, run-down heaven that smelled of old popcorn oil, projector grease, smelly customers and death (the mice in the traps), but heaven for a film lover none-the-less. I have since left the theatre but my love of film and the beautiful art of costumes remains.

While at the theatre I met and befriended my fellow costumer, Maggie. She’s featured in many of the exploits described here, much to her chagrin or amusement…I haven’t really figured out which. A year or two into our friendship the two of us began our own costume business – Phoenix Phantasy Accessories.

Honestly, it’s not so much a business at the moment as an occasional hobby and something we’d like to explore a bit more. We still do the odd piece now and then, through connections built on a “heard-it-through-the-grapevine” basis.

A while back I had tried to get into the whole livejournal “thing.” That failed when I never remembered to update things and,eventually, forgot the address and log in info all together. Then I started writing a few entries in the built-in blog on MySpace. I actually managed to keep it up for a while but I don’t really go to that site all that often, either. And, really, I wasn’t that interested in what I was writing about.

In February 2009 I decided to start a new blog focused – more or less – around my favorite thing…sewing. Specifically, sewing costumes. I created a basic account over on Blogger, sent the word out to friends who might be interested and they encouraged me to keep it up. Well, in Maggie’s case said encouragement comes across more like demands and threats of bodily harm if a new entry isn’t put up soon but that’s just her way of saying “good work and keep it up.”

When I started I really wasn’t sure if I was going to be able to keep things up with the new blog. It soon became apparent that wasn’t going to be a problem and, with my interest secured, I decided to up the ante and create a more professional looking site through WordPress.

Why “Nerf Guns and Bobbins”?

The original name for the blog the first day I started the account over on Blogger was “Merry Bobbins.” I love puns and thought it was funny. It’s a good thing I went back and did my research, though, because I soon learned that a “Merry Bobbins” blog already existed. I’d already started the blog so I needed to figure out a new, totally distinctive name as soon as possible.

I started thinking: what epitomizes the work I do? My costumes tend to skew towards the “cute and cuddly” end of the spectrum but I couldn’t figure out how to work that into a title. Finally I thought “what are the things in my ‘costuming corner’ that I have the most of?”

Three guesses what that turned out to be. 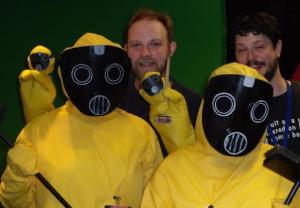 Proud day, meeting the creators of Bob and Carl

2 thoughts on “The Woman Behind the Machine”